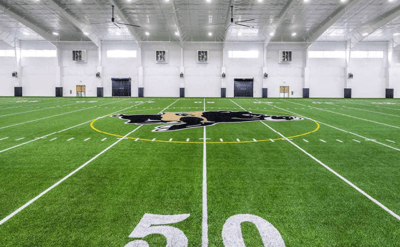 began by establishing subgrade on the outdoor synthetic turf field and track area. A 6-inch porous stone base was installed accompanied by a full underdrain system which ensures a minimum of 60 inches an hour to drain successfully from the new synthetic turf field. Track drains were installed around the perimeter of the field to capture runoff from the track.

The artificial turf system installed on the field is AstroTurf 3D3. This system features a RootZone. This texturized layer of fibers that lives where thatch would be found in Bermudagrass, encapsulates infill, significantly reducing rubber splash, better shock absorbency, and less infill migration than basic systems. Sand was incorporated into the synthetic turf system as a ballast before SBR rubber was groomed into place. Z-Cap, a mineral that absorbs 81% of its body weight in water and then slowly releases it to cool off the field, was incorporated over the SBR rubber. Once the structure was completed by others, Sports Turf Company began construction of the field inside. The 100-yard synthetic turf practice field incorporates the same drainage design as the outdoor field. The indoor field also features the AstroTurf 3D3 artificial turf system, which is critical for indoor environments where the lack of humidity results in very dry rubber infill that can migrate easier. The RootZone layer in the turf system plays a significant role in keeping the infill in place and improving footing vs other indoor turf systems. 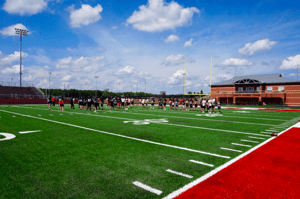 time for the 2018 football season.

The track surfaces are a Rekortan G10 full pour system, a performance track system that makes it one of the best in the region. The gel layer will provide exceptional adhesion to the asphalt surface and cushion under foot for runners. There is a wear layer on the surface that can be re-topped periodically over the years as necessary to further extend the life of the track at a minimal future cost. Sports Turf Company appreciates the important role the AGC plays in work force development and representing commercial contractors, and is honored to be the recipient of these two first place awards.
Share Post:
Ensuring your Track Renovation or Construction is Successful: Hire a Certified Track Builder 5 Reasons to Consider a Shock Pad in your Artificial Turf System