Thomasville High School’s stadium was a renovation from natural grass to synthetic turf, won by Sports Turf Company through a competitive proposal process. The elite field features one of Astro Turf’s safest and most 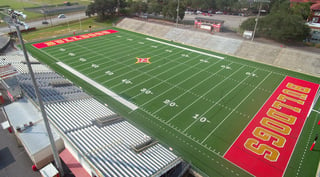 advanced synthetic turf systems. The system features a 3D3 HD turf with rootzone to help eliminate infill splash and improve player footing, as well as a Brock SP14 pad to increase player safety and maximize performance. To reduce extreme South Georgia temperatures, Zeofill was layered over the top of the infill. Zeofill is a mineral that absorbs 81% of its weight in water.

Emory University’s soccer stadium was a renovation of a natural grass field to an elite natural grass field with an underdrain system and sand based rootzone. The stadium can now can take on a great amount of water and traffic and still remain playable all season.