The Auburn Board of Education Unanimously Approves Sports Turf Company 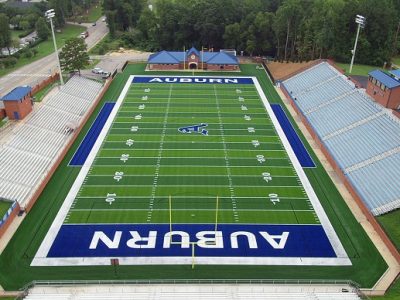 Grass-stained uniforms will be a thing of the past for some athletes in the Auburn community, as the field at Duck Samford Stadium will house a new sports turf surface by the start of next school year.

The Auburn Board of Education unanimously approved bid results Tuesday from Sports Turf Company Inc., out of Whitesburg, Ga., for the installation of synthetic turf to replace the natural turf at Duck Samford Stadium, a project that is slated to take place over the summer with the synthetic turf in place by the time school starts in August.

The price tag of the project, at approximately $629,000, will be funded through a combination of bonds that were refinanced by the City of Auburn and capital funds from Auburn City Schools, $580,000 of which comes from the former and $49,000 from the latter.

According to ACS superintendent Dr. Karen DeLano, the school system has been considering synthetic turf at Duck Samford for a few years, during which time it has vetted the implications of synthetic turf versus natural turf.

“For over two years we have reviewed the condition of the field surface over at Duck Samford,” DeLano said. “We have had experts in turf of multiple kinds work with us and help us as we went through this review. We knew that this year was the last year that the surface we have could be used for students. Something would have to be done to improve it. We have several issues such as drainage and then the condition of the turf.” 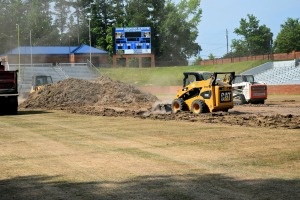 Robert Walker with TCU Consulting Services has assisted the school system since 2013 in reviewing its options to help combat the field's issues. Experts examined and conducted tests regarding root conditions, turf depth, soil, density and moisture content, among other factors.

“The field does not drain well,” Walker said. “It has a very shallow root zone. And the major problem with the field, the condition that it’s in, is that the majority of your activities begin in the fall, which is a time when the Bermuda turf is going dormant. So your field is getting chewed up through 20-plus football games, and then in spring you have over 40 soccer events on the field.”

Daniel Chesser, public relations specialist for ACS, said that synthetic turf will ultimately increase the playing capacity for the field.

“When it comes to an analysis of synthetic turf versus grass turf, the benefits of synthetic were a deciding factor for ACS and more accommodating to the amount of use Duck Samford Stadium has in a given school year,” Chesser said.

“But with synthetic turf, ACS will be able to host nearly 70 competitive events throughout the year without the need for … the man-hours that go into routine maintenance of a grass turf field.”

Eliminating the costs associated with irrigating and striping the field, as football and soccer striping will remain permanent on synthetic turf, are other benefits that Walker cited.

“And then in addition, you don’t have the cost of planting rye in the fall, tilling the rye in the spring and patching the till in the summer,” he added. “And you don’t have to mow it. The reality is, with this field, the bids we’ve received will solve the drainage problem for the field.”

Despite the stated benefits, one citizen spoke out in opposition to the installation of synthetic turf.

“When installing artificial turf fields, workers are advised to wear protective gear such as gloves and respirator masks,” Segrest said. “This is not so they don’t cut themselves on the grass. The guidelines for installation are complete with warnings and a list of all the carcinogens that are found in the rubber. When installing, they are warned about contact and breathing in the AT, or artificial turf, but you guys want our kids to play sports on this surface. I have a problem with this.”

Higher surface temperatures, the effect of synthetic turf on equipment, presumed heightened injuries and abrasions and the possible presence of harmful toxins were among Segrest’s other concerns. Prior to the vote during the board’s hearing of delegations, Segrest encouraged the school system to wait for the results of ongoing studies by the Environmental Protection Agency and Centers for Disease Control and Prevention, among others, to make a decision regarding the turf.

“When my son comes to me and he asks me to fight for him on this, I have to,” Segrest said. “I have to do what I think is right for him, and that is what I am doing now.”

Experts and school system officials, including ACS Athletic Director Clay McCall, visited synthetic turf manufacturing facilities and other venues that have installed synthetic turf over the course of the consideration process.

“All has been positive feedback in aspects of other coaches and athletic directors from the safety concerns,” McCall said. “And they took the approach that we did, that being the common factor of importance — the safety of our student athletes. And they were pleased with the results they had received to this point.”

Though admitting that the surface of synthetic turf fields does reach slightly higher temperatures than natural turf, Walker said that the infill for the turf, a chrome rubber, has been used on playgrounds and fields since the 1980s and that at least 30 studies have been conducted on synthetic turf, none of which revealed a connection between the product and harmful illnesses.

“I’ve got two 10-year-olds in the Auburn school system that play soccer, they love soccer and I hope one day they’ll play on this field, and I wouldn’t recommend a product that I thought was a hazard to my children,” Walker said.

Board president Matt Clegg said he also has a 10-year-old who plays soccer and that he, too, wouldn’t support a playing surface that he did not believe was safe for the school system’s children.

“I think providing a safe, consistent playing surface, this is the direction we’ve been needing to go for a while, and again it has been a diligent process to get us to this point,” Clegg said. 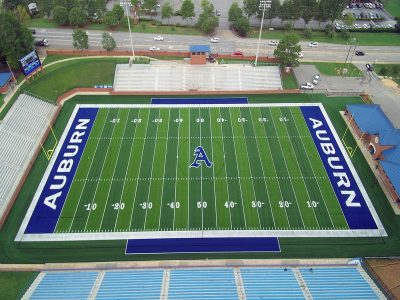